A Comparison of Leveraged Token Designs 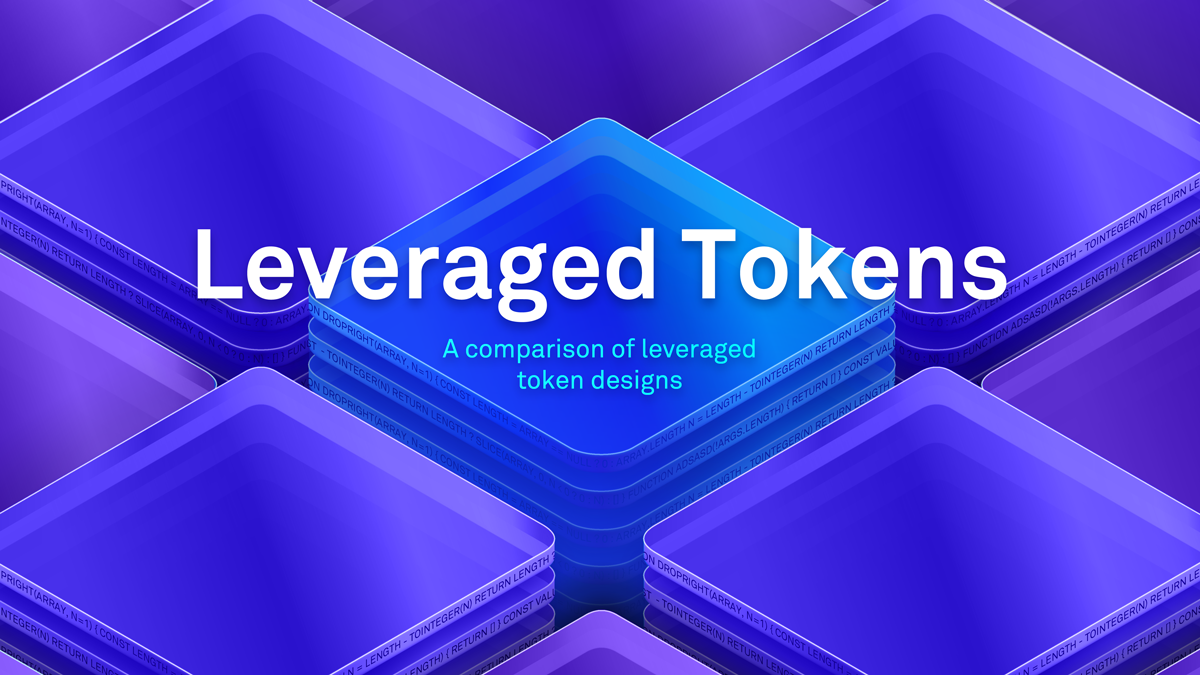 A Comparison of Leveraged Token Designs

A leveraged token is a financial instrument that represents a share of a leveraged position on a given asset – they're a simple way to gain a leveraged directional bet on a price feed.

In this article, we'll give you an overview of the leveraged token market and compare features against Tracer Perpetual Pools, our novel implementation of a leveraged token.

Leveraged tokens specify a fixed leverage that they'll track (e.g. 3x) and provide returns in line with this specification. As the price moves for the underlying asset, this position's leverage will diverge from what's intended. These tokens thus require rebalancing - the act of selling or buying the underlying asset(s) in order to regain the intended leverage.

These tokens have differing criteria that triggers their rebalancing - some are price-based triggers and some are time based.

Leveraged tokens aren't new. These tokens are a modern-take on Leveraged exchange-traded funds (ETFs) – a financial instrument that's been around for some time in traditional finance. These ETFs gain leverage by holding a combination of debt and the underlying asset, which are then wrapped into shares that are freely tradable. Traders trust the management of the ETF to rebalance the fund to its target leverage (usually limited to 2x or 3x) at the end of each day.

These instruments have vulnerabilities. LETFs are not inherently immune to liquidation. These ETFs warn that while they manage the fund closely, a liquidation (bankruptcy) is always possible. However, LETF firms note that by use of the exchanges "circuit breaker" mechanism, (which stops trading during market free-fall) they're generally immune to such liquidations.

LETFs charge around 0.5% to 3% per year to manage the fund but also lose equity over time for the interest rate on borrowed funds, as well as for the slippage to rebalance the portfolio to target leverage. The result is a fungible leveraged asset that has a higher cost than manually maintaining a leveraged position, has a nonzero chance of liquidation, and is limited in leverage to 3x due to regulation.

In cryptocurrency, the demand for leveraged tokens has also been fulfilled by using trusted centralised third parties. Leveraged tokens such as ETHBEAR and ETHBULL were created that roughly provide 3x leveraged exposure to Ethereum. A centralised trusted entity manages a perpetual swap or lending platform position and sells shares of this position – they also charge a management fee that is generally 1% per year.

Even if a decentralised trustless system for managing a leveraged portfolio and selling shares of it were used, the system would be complex and likely built on top of a complicated system such as a perpetual swap. It's possible to come close to the ideal trustless leveraged derivative in this manner, but with the slippage, market liquidity risk, and system complexity risk; it's possible to make a far simpler and more affordable leveraged token. 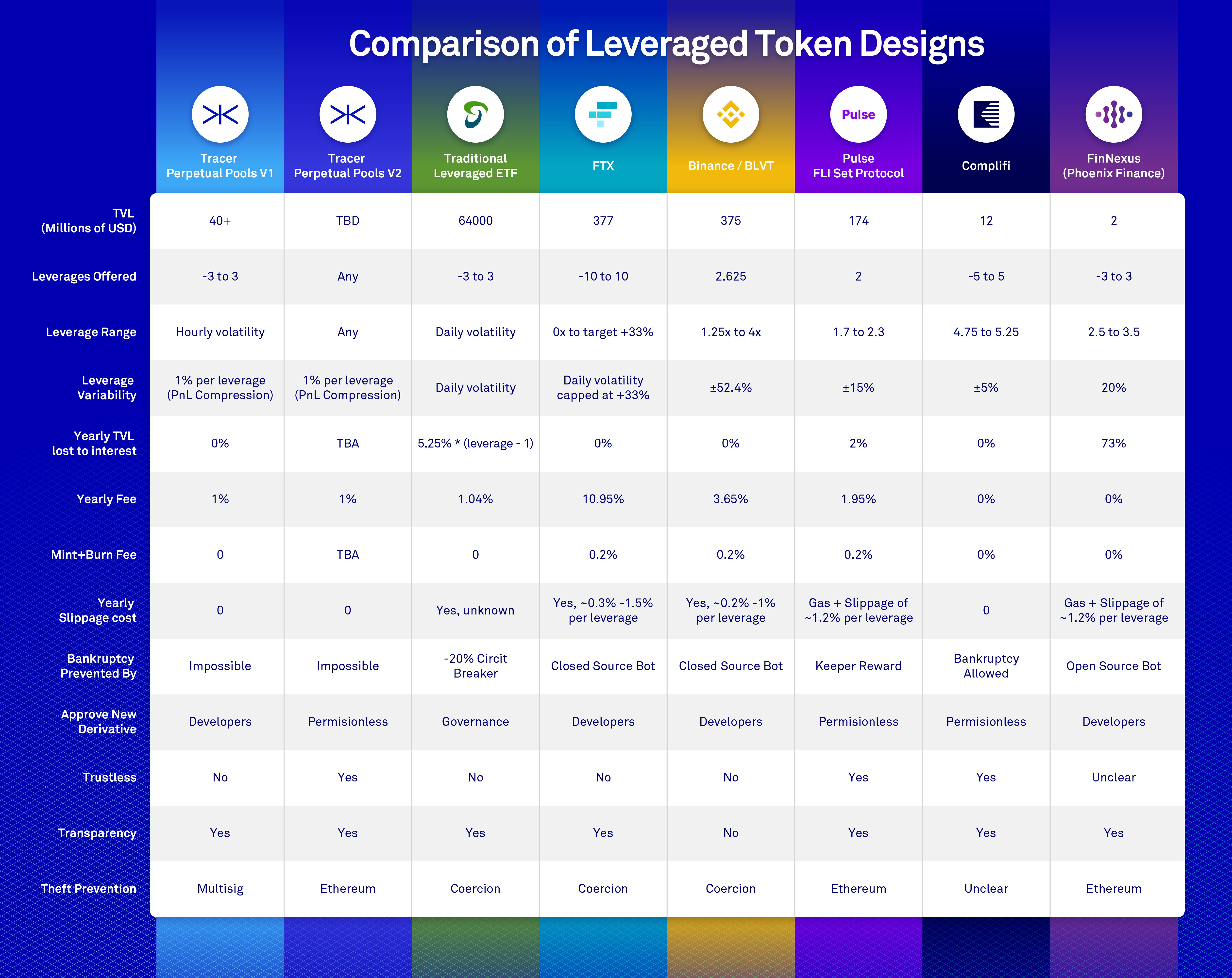 Because Perpetual Pools don't require ownership of the underlying, they're unique in the market in three ways:

As seen in the above figure, leverages for the market are constrained within the range of (plus or minus) 5x – bar the exception of FTX. This limits the exposure that users can acquire on a directional (long or short) bet.

We believe this is against the ethos of open finance.

Because Tracer doesn't require ownership of any underlying, it means that it can provide markets at significantly higher leverages. This also imbues Tracer with a significant competitive advantage insofar as it doesn't have to worry about liquidation or rebalancing the underlying assets held within LETFs. Leveraged token managers who build these instruments with underlying assets have to worry about constantly rebalancing their position to maintain the intended leverage, which adds the risk of liquidation, as well as further costs like slippage. These instruments usually maintain their leverage within a range of the intended leverage – ultimately they have the worst of both worlds: they don't maintain an intended leverage and they don't rebalance often.

Tracer Perpetual Pools maintains its intended leverage if the capital between sides is equal; **and never requires rebalancing of the underlying assets – it's all in the power of the swap agreement.

These leveraged tokens to date usually acquire their leverage via a perpetual swap or another method of borrowing such as Compound/Aave. This incurs borrowing costs (whether explicitly, or implicitly in the case of a perpetual swap funding rates).

However, because there's no actual debt that's being borrowed in Perpetual Pools v1, there's no funding lost because it's all kept within the ecosystem (either within the long side or the short side). For Tracer Perpetual Pools V2, we anticipate launching with aDAI as a settlement quote asset, which would enable users to gain interest while maintaining their position.

Free from the expensive process of constant rebalancing and requiring a team of portfolio managers on standby, Tracer Perpetual Pools is radically cheaper than its competitors who charge eye-watering fees to facilitate all of these actions and maintenance. Tracer Perpetual Pools V1 (and V2) only take a 1% clip of TVL, annually. This is in line with Traditional LETFs and is significantly cheaper than FTX at 10%. Tracer V1 and V2 will not charge a mint and burn fee – unlike its competitors.

Tracer Perpetual Pools is actively making the mechanism trustless and open-source. This cannot be said for its competitors! LETFs have a "circuit breaker" to prevent bankruptcy, FTX and Binance have a closed-source bot, for example.

Tracer V1 security is currently enforced via the trust of the dev multisigs. In V2, this will move away from multisigs to have pools secured completely by the blockchain. All competitors' Leveraged Tokens are relatively transparent in terms of how they ensure their maintenance of said leverage, except for Binance.

What the Key Differences Mean

Leveraged Tokens are not new, they're a modern-day implementation of Leveraged ETFs.

The problem with LETFs, and many leveraged tokens, is that they require holding the underlying asset and having debt, too. This makes rebalancing expensive and has the spectre of liquidation and bankruptcy hovering as a risk possibility.

Perpetual Pools is fundamentally different. It's a mechanism whereby leveraged tokens can be created via ownership over a pool of collateral, where the value transfer simulates leveraged exposure – without the downsides of leveraged tokens.